So you are planning on attending Gen Con this summer to enjoy ‘The Best Four Days in Gaming’. What should you do while there?  Why enjoy the worlds greatest roleplaying game that started it all of course.

Baldman Games is bringing back an even bigger event schedule then we had for our record breaking year last year. Sixteen different D&D Adventures League events, including the continuation of the new Moonshae Isles campaign from BMG, and four D&D eXPerience @ Gen Con tracks.

Want to help out at the show ? Awesome. Click here for more information.

Want more information on what the D&D Adventurers League is, what the rules are, and how to make a character? We can do that!!!! 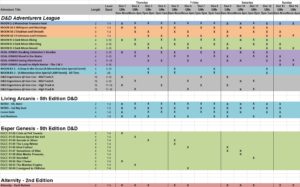 MOON 1-1 Moonshae Treasure Hunt (Introduction to Adventure): Want to learn to play D&D? New, returning after some time off, or introducing others to the game this is your event. The Moonshae Isles, beautiful and dangerous, provide adventurers the opportunity to fight evil–and uncover ancient secrets and treasures. When a mysterious figure predicts a grave future for you, it triggers an Isles-spanning adventure, full of intrigue, fun, and danger! Play in one of four 90-Minute Mini-Adventures for 1st-2nd Level Characters, legal for D&D Adventurers League play and brought to you by Baldman Games. From here continue on to our four hour games for an entire weekend of fun and excitement.

MOON 10-1 Whispers and Warnings: The reach of the Shadowfell has come to Alaron! The Great Gark’s forces are intent on spreading the Howling Disease throughout the island, and the fey are in dire peril. Will you ride to their aide or will the shadow spread across the land? A four hour D&D Adventurers League adventure for 1st to 4th level characters, set in the Moonshae Isles and brought to you by Baldman Games.

MOON 10-2 Shadows and Shrouds: A new threat is gaining power over the moonwells of Alaron, and the druids of the Earthmother believe the best way to uncover the sinister plot is to venture into the Shadowfell itself. A four hour D&D Adventurers League adventure for 1st to 4th level characters, set in the Moonshae Isles and brought to you by Baldman Games.

MOON 10-3 Fortresses and Fortunes: Forces are gathering at Caer Callidyrr. The Slain seeks to capture the High King of the Moonshaes, and the fate of Alaron hangs in the balance. What will happen when the Shadowfell and the Feywild troops collide? A four hour D&D Adventurers League adventure for 1st to 4th level characters, set in the Moonshae Isles and brought to you by Baldman Games.

MOON 9-1 Dark Moon Rising: Haldis Helmudson is missing in Norland after investigating strange rumors of giants prowling the night. Arriving on site you find nothing amiss, but is everything what it seems? What will learning Haldis’ fate reveal? A four hour D&D Adventurers League adventure for 5th to 10th level set in the Moonshae Isles and brought to you by Baldman Games.

MOON 9-2 Dark Moon Marching: A shadow has fallen over Norland. Firbolg and duergar march down from the southern mountains. The Norfolk army has a slim chance for victory, but their expertise lies not in landbound fighting. Can you help before the human army falls? A four hour D&D Adventurers League adventure for 5th to 10th level characters, set in the Moonshae Isles and brought to you by Baldman Games.

MOON 9-3 Dark Moon Bound: Ashes rain down on Norland. Little hope is left for those remaining free of the shadow. All that remains is a retreat, but something must be done to halt the shadow from leaving the island. A four hour D&D Adventurers League adventure for 5th to 10th level characters, set in the Moonshae Isles and brought to you by Baldman Games.

DDAL-DRW01 Breaking Umberlee’s Resolve: The search for a missing young woman kicks off a treacherous journey on the Sea of Fallen Stars. A Four Hour Adventure for Tier 2 Characters. Optimized for APL 8.

DDAL-DRW02 Blood in the Water: You’re led to the ancient underwater city of Myth Nantar by some notes in a captain’s journal and an old map. The mysteries you uncover may find you drowning in troubles you didn’t know you had. A Four Hour Adventure for Tier 2 Characters. Optimized for APL 8.

DDAL-DRW03 Saving Silverbeard: In the aftermath of the Assault on Myth Nantar, Zehira is missing once more, only this time it doesn’t appear as though she left willingly. A Four Hour Adventure for Tier 3 Characters. Optimized for APL 13. Please note – the third part of this series is Tier 3 and not Tier 2 as the first two parts are. Please plan your character advancement appropriately if playing this series.

DDEP-DRW01 Assault on Myth Nantar – Tier 2 & 3: Thay has set its sights on taking the underwater city of Myth Nantar. Can you stop a full-on invasion by its, or will the sea elves be looking for a new home? A Four-Hour EPIC for Tier 2. Optimized for APLs 8 and 13.

MOON ES-2 – (A Moonshae Isles Special LARP Event) – The Moonshaes are falling into shadow as the reach of the dread entity known as “The Slain” extends across the isles! The Moonwells darken and even great Caer Callidyrr, the capital of the Moonshaes, has succumbed to the power of the Shadowfell. Hosted by the mysterious feylords of Sarifal, the Alliance of Light gathers in a Great Conclave at the ruins of Caer Corwell to form a plan. There, the many orgs of the Moonshaes will determine the future of the isles. What will be done about The Slain? The fate of the Moonshaes is in your hands! This is an AL special event for the Baldman Games Rising Shadows storyline. It features an interactive event where you represent one of the six competing orgs in the Moonshaes. Play will be LARP-style, where you roleplay your character interacting with other player characters and NPCs of the Moonshaes. This event is open for characters of all levels.

All D&D eXPerience events at Gen Con are designed to be the top tier of your D&D Adventurers League show. All DDXP events are held in their own private area with sound-buffering drapes and each table has more space around it then normal. Our highest rated DM’s are hand picked and you will have that same awesome DM and the same players at your table for the entire series of adventures. The adventures have been written as a continuous storyline that is only playable through the DDXP at Gen Con by our handpicked authors who do great work. Each track will conclude with a special event (Moonshae Trilogy 4 or 5 depending on tier) that will not be released to the general public. You will receive a custom D&D XP badge that will allow you accecss into the DDXP play space which will also have your schedule on the back to help remind you when to be back. A concierge desk will be out front to help with any needs you might have such as log sheets, needing to print a character out, pencils and pads of paper, or directions to a quick lunch or bathroom.

The D&D eXPerience @ Gen Con (Mid Track A and B): Enjoy the best we have to offer at the show, along with some cool unique perks, with one easy ticket. This track is for players with legal D&D Adventurers League characters levels 5-10. You will participate in MOON 11-1, 11-2, 11-3, and 11-S.

The D&D eXPerience @ Gen Con (High Track A and B): Enjoy the best we have to offer at the show, along with some cool unique perks, with one easy ticket. This track is for players with legal D&D Adventurers League characters levels 11-16. You will participate in MOON 12-1, 12-2, 12-3, and 12-S.

© 2019 GEN CON, the Gen Con logo, and The Best Four Days in Gaming! are trademarks of Gen Con LLC.