Sorry it’s been so long since you’ve heard from us but if you’ve been following Baldman Games on Twitter then you’ve seen the #phlanhistory posts. Here’s the history compiled without our bit of commentary. I do have a conclusion about Phlan though, it’s a terrible place to live, much akin to New York City in the Marvel Cinematic Universe. To all those poor souls living there and defending that city, I’m so sorry. Please do yourself a favor and move to Waterdeep.

An Abriged History of Phlan

400 – Phlan leveled by horde of humanoids

712 – Milsor the Valjevo rebuilds Phlan and has Valjevo castle built.

1306 – Phlan is once again reduced to ruins during the Dragon Run.

1340 to 1347 – Phlan is controlled by Tyranthraxus, a yugoloth controlling a bronze dragon.

1347 – Adventurers take back Phlan from Tyranhraxus (Pool of Radiance)

1357a – Phlan is teleported to a cavern under a red wizards tower to use as a soul battery.

1488 – Vorgansharax and the cult of the dragon take over Phlan.

1489 – A huge force of Adventurers retake Phlan from Vorgansharax.

I know we’re missing a few things from this time line and I’d love your help in filling in the gaps. Leave a comment below about where we’re missing things and we’ll fill them in as we go. 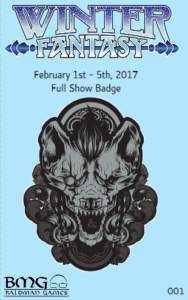 Hello gamers. Winter Fantasy is right around the corner. That means all of the gaming joy you desire is about to be had. If you’re still on the fence about going or not, there are still slots open for games, so check out the event list here. Let’s whet the rest of your appetites. To the left and right are what the badges look like this year.

Now we just don’t talk about Winter Fantasy around these parts. Baldman Games also produces adventures, which are AL legal. If you’re following the Baldman Games twitter feed, you’ve been seeing the emu casino #elmw tidbits pop up lately. That’s because the Elmwood Trilogy is going to be released in the near future. To whet your appetite for when that shows up over on the DMs Guild, here’s a 5 page PDF that provides a glance at Elmwood and a map of the town today.

Enjoy Elmwood and let’s gear up for some gaming at Winter Fantasy!

I want to thank all of those who applied for our open positions we posted in October. We had a lot of great applicants to go through but after careful thought and consideration we have made our choices.

We have lots of exciting things planned for 2016 and we hope to start unveiling them at Winter Fantasy in February. So stay tuned, stay excited, and join us for a fun ride.

Baldman Games, those purveyors of fine gaming though-out the lands (or maybe just the Midwest), are looking for some help on various projects this fall within our realm. If you are a warrior of the highest order and think you might qualify for one of these positions then please fill out the application below. When applying please pick only one job. I want you to apply for what you think you best fit not scattershot across the board. We hope to make our decisions in October and put you to work shortly after that. If you have any questions please use the ‘Contact Us’ form on the BMG website and we will get back to you shortly.

Expected Weekly Workload: 2-3 hours
Skills needed:
Compensation: TBD (we have a basic package built around the value of a free hotel room just for you at a show but will tweak for your needs – this could include airfare, cash, etc.)

Expected Weekly Workload: 2-3 hours to start (could ramp up to 8-10 hours a week at times in future – compensation will match workload).

Applications are closed and the positions have been filled. Thanks.

As you can see we’ve updated the website while you were sleeping. We’ve tried to streamline it and bring it up to the times a bit. You will hopefully find information a lot easier to find and specific large shows will actually have their own feeds. So while there is not a lot to see yet stay tuned as with the big summer shows roaring down the tracks it is going to fill up fast.